Giant Garden Darts is a huge version of the popular darts game. Played on grass only, players must throw their darts and hit the target  area which is placed on the lawned area in front of them. The length of the oche should be adjusted according to the age and abilities of the players. Children must be supervised by an adult when playing this game.

Giant Garden Darts is a superb addition to other equipment and is available to hire in Worcestershire, Gloucestershire, Herefordshire, and The Midlands. 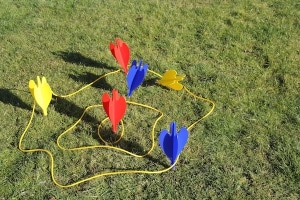 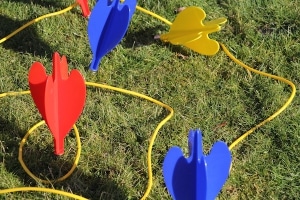 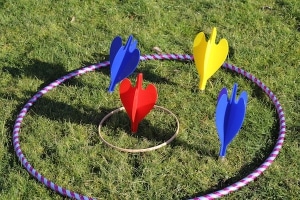 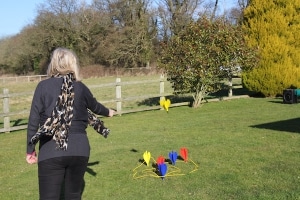 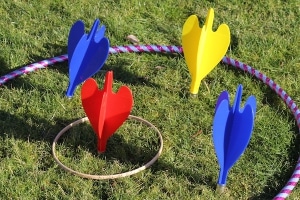 Email us at: [email protected]

What our customers think

What a fantastic team! I really cant thank BBC Inflatables enough, we booked Hook a duck, Rodeo Bull, a giant operation game, a buzzy Wire game and a large photo booth with props for my 50th birthday bash. These guy arrived promptly and set up and took down their equipment with no fuss. The chaps working the Bull, Ducks and Photo Booth were tirelessly patient and very friendly. BBC are real value for money, we will definately be using this company again. HUGS thanks from all my guests to you all you helped make my 50th party one to remember!

Hello Jon, Just wanted to drop you a note to say a huge THANK YOU for Wednesday evening. Your guys were amazing and all our staff and guests thoroughly enjoyed all the games, particularly the Rodeo Bull ( of course). The service we have received from your company has been fantastic and in a world where good service is in short supply it has been a pleasure to deal with you. I will let you have some photos as soon as I have any and would have no hesitation in doing a recommendation for your website or other search media. Wishing you all a very Merry Christmas and a Happy, Healthy and Prosperous 2018.

Hi Jon, Jane & Staff Just really wanted to thank you all for making our Fun Day so enjoyable. Even though the weather went downhill your team worked so hard work, their service and humour was fantastic throughout. Everyone was very impressed with the quality of the rides and stalls and how friendly your staff were. We will definitely use you again so pencil us in your diary!

I just wanted to say a big thank you to you and your team for the entertainment that you put together. It added a fun factor and made our big day even more special.
The rodeo bull was definitely a big hit with everyone.
Keep up the good work.
Scroll To Top